Research on The Eastern One Shoulder Hide Dress 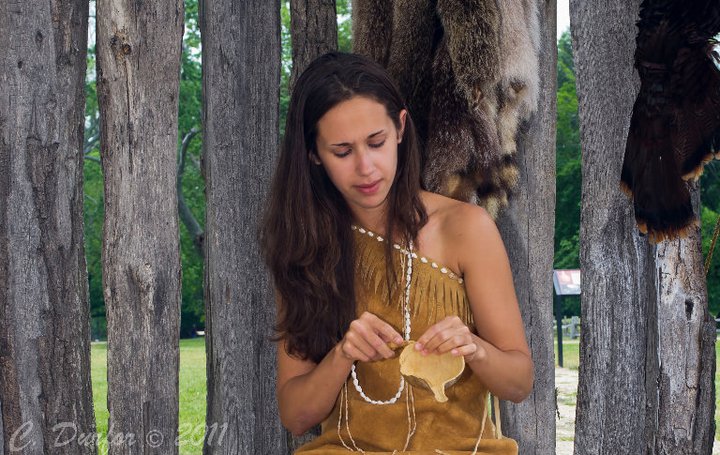 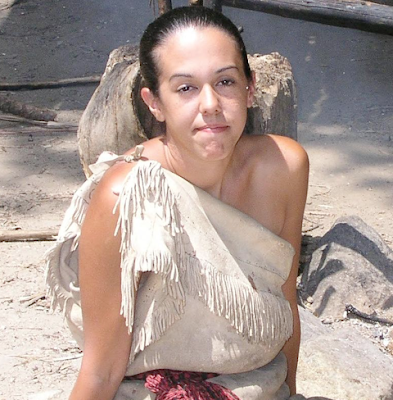 Discovery of the Day! I watched a PBS Series last night about First contact between Native and European peoples on the continent and it led me to do some more searches for tribe specific clothing.

I began my search for the Wampanoag people, the Natives who interacted with the so called "Pilgrims" of Plymouth rock and Thanksgiving fame.

I came across this site linked in the pictures below to a Native reenactment village where they are actually wearing the garment I will be recreating soon.

I was thrilled to find that the arm closure I documented on Mia's actual dress was authentic, and the manner of attaching the shoulder correct.

This is a big moment for me, as the garment had been modified to include a button closure, something I was not comfortable with using, (I never have seen button closures used in pre contact clothing).
But, the garment DID have mysterious slits on either end of the fold-over that implied a drawstring to me, and when I repaired it, I did add the leather drawstring, but left the button closure as I did not want to over-alter the dress, (it was not mine, after all).

I have been searching ever since for the actual closure, and these pictures show the leather thong strap closure I have been thinking of all along and was evidenced in the actual garment I studied. It lends a graceful closure to the over-the-shoulder attachment, and will look stunning!

Here are more photos and links to the actual page where I found my material for this article, I will be ever grateful to the Wampanoag for keeping their historical clothing alive!
The following is their sites wording and not mine:

Unlike the people you’ll meet in the 17th-Century English Village, the staff in the Wampanoag Homesite are not role players. They are all Native People  - either Wampanoag or from other Native Nations - and they will be dressed in historically accurate clothing, mostly made of deerskin. They speak from a modern perspective about Wampanoag history and culture. They are happy to see you and will invite you inside a wetu, or tell you what they are growing in the garden, or show you how to play hubbub, an ancient tribal game still enjoyed by many Wampanoag today. The staff in the Wampanoag Homesite are very proud of their Native heritage, and knowledgeable of the traditions, stories, technology, pasttimes, music and dance of the people who have lived in this region for more than 10,000 years. Ask lots of questions! You may be surprised what you will learn.

Photo copyright Rusty Moore.12. You don't look like the images of Native People I've seen in movies and books. Are you a "real Indian"?
Those of us dressed in deerskin clothing on the Wampanoag Homesite are all Native People - a term we prefer over "Indian" or even "Native American". Most are Wampanoag, but a few people are from other Native Nations. Many images of Native People in movies depict Native stereotypes. But there are actually many different Native Peoples throughout the Country, with a variety of different physical features as well as different lifestyles.
If you want to know about our heritage, just ask us: "What Native Nation are you from?" We'd be happy to talk with you about it.
2.  Who will I meet at the Wampanoag Homesite?
All of the staff in the Homesite are Native People - either Wampanoag or from other Native Nations. Asking staff what Native Nation they are from is a great way to begin a conversation. You are lik

ely to meet some people who are Wampanoag--one of several Peoples (or Nations) indigenous to the southern coast of present-day New England. The Wampanoag have been living here for over 10,000 years.
While their clothing and houses are traditional, the Native interpreters you meet are not role players. They speak from a modern perspective about Wampanoag history and culture. This enables the staff to talk with you about historical as well as contemporary  issues, events and information about the Wampanoag. 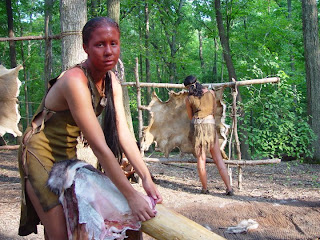 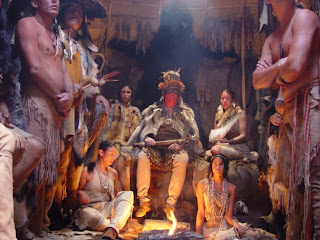 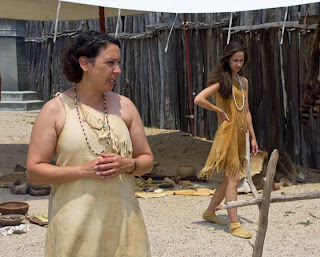 Here are more recent photos from Jamestown and at the end of these pictures is the dress I created to represent this type of garment. 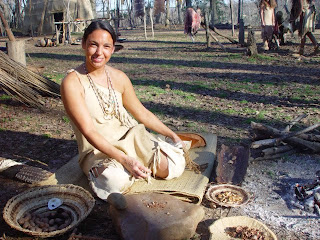 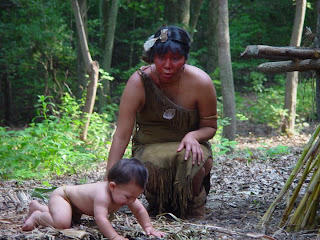 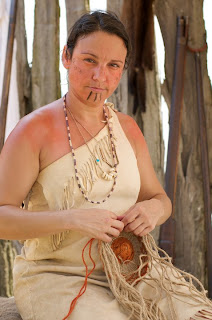