The Two Hide Dress was a recent invention in terms of Native American History, Clark Wissler, Author of the "Anthropological Papers of the American Museum of Natural History, Vol. XVll, Part ll 1915" made an extensive study of the evolution of the everyday wear of Pre Contact Aboriginal peoples of this continent. It's creation dates back more than three hundred years, so it's not exactly the latest fashion but is an important part of Native American History! If you want to read this very important work you can download the PDF Here. 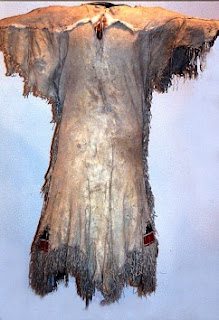 According to his studies, the Plains dress came about once tribes moved from East to out West and began hunting buffalo, this provided them with a relatively affluent lifestyle in which they had more time to make and prepare more tailored clothing, also the windswept arid climate of the Plains required more of a covering than the "Over the Shoulder" one hide short dress or the rather brief leather strap dress worn for comfort while maneuvering through the dense woods of the East. It's an interesting theory that bears our attention and inquiry.
Two hide dress from the Cody Museum.This may be the most important dress I can show! Work dresses were not decorated, and they were the ones worn everyday by Indian women. The other dresses, with all their fancy decorations, were for special occasions. Any well off woman would have owned their everyday dress and one ceremonial or special occasion dress.
Photo & Info Source:
http://www.womenofthefurtrade.com/ 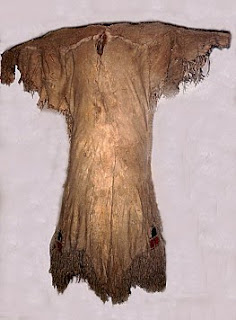 The dress was made by joining two Deer, Sheep or Elk hides, head down. The hide was tanned by the use of Brain Tanning, which gave the leather a soft washable texture, much like a heavy chamois. The very top edge of the animal, (The hind quarters), was carefully tanned to preserve the deer tail and a strip of fur along its edge.
The hide was either sewn with the flesh side, (Inside out), out and the top edge was folded outward and tacked down to create a decorative colar edge or the hide side was left out on the main body and the folded over portion cut off and re attached so both hair sides faced out depending on the tribe and how special the garment was.
As much of the hide that was practical was left attached and the shape and form of the hide preserved paid homage to the animal that supplied it.
It was sewn at the sides with a running stitch or whip stitch using Sinew thread or tied shut with a few leather thongs at the sides. The armpits were generally left open for ventilation.
The bottom of the skirt sometimes had colorful inserts at the knee area, most think they were purely decorate, my opinion is that the used them to kneel on to keep the dress clean at first, then became a decorative item later on.
The sides bottoms were fringed to make the garment move more fluidly, make it cooler to wear and give it a more tailored look.
Special occasion dresses were ornamented with natural items such as Elk's teeth, Dentalian shells, natural copper and other found pieces as well as decorated with porcupine quill art.
If you look carefully at the photos you will note that the hind legs of the deer are left as intact as possible and draped over the arm, often the "deer toes" were left attached. At the bottom hem, you will see the neck of the deer in the center and the front legs make up the side seam of the dress, giving it its unique hemline.
The hides were often painted as the picture on the right shows, (Click on the photo for a larger, more detailed version).
Arikara two-hide dress, ca. 1840: North Dakota. Bighorn sheep hide, blue-green and red paint, sinew. Before the widespread introduction of the European trade materials in the early 1800's, most dresses were simply decorated using earth paints.
Source for Photo and Info:
http://www.flickr.com/photos/nostri-imago/2893137533/in/photostream
Below are paintings by George Catlin scribed post contact, of course, but Plains Tribes were still wearing traditional favorites even in the 1800's. Note the quill work...and the deer tails at the neckline.