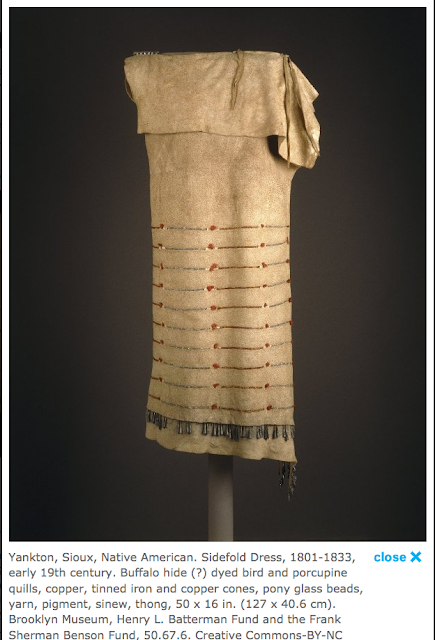 The True Side fold dress is always a one hide dress wrapped around the body with an armhole cut in the folded side and the side seam left open on the seam side to accommodate the arm.

Many Off The Shoulder dresses are wrongly categorized as side fold dresses as the construction is very similar, the difference being the hole obviously cut on the fold side to allow the arm through.

These dresses were popular on and off through history in between the Off The Shoulder and Strap Dress Era. They obviously were limited to those tribes who had access to very large hides such as Elk and Buffalo.

No evidence of detachable sleeves or leggings are present.

Catalogue Description of the dress above: This side fold dress consists of six pieces: the main body of the dress, the flounce, the shoulder flap, the top bodice, and two hide things as a second shoulder strap. The horizontal seam is low and the folded over portion is shorter and would barely cover the breast. The folded over flap is even shorter in the back. The hide is worked so that the flesh side of the skin lies against the wearer, with the fur side out. The flounce is laced with hide thong. The seam of the dress, the blue and white pony beads on the shoulder strap, and the hem tabs are all sewn. It is likely that the two bottom tabs at the left side of the dress are formed from a remnant of the foreleg of the animal or are a decorative form to resemble this pattern technique. Ten quilled stripes are worked around the skirt of the dress, horizontally, in measured registers of blue (once blue-green but faded since original BMA acquisition) and brown quill, separated by shorter sections of white porcupine quill where red tufts, once the tassels, of yarn emerge. Small black lines separate each quilled section. Some vertical marks of what is probably ochre appear at the ends of the quilled bands. Tin cones and a few copper cones are sewn to the bottom of the flounce, more or less at knee length, and on the two bottom tabs, which are further elaborated with an edging of blue and white beads. Five pairs of copper cones are sewn up the side seam. If the shoulder strap is examined from above, blue and white beads can be seen ornamenting the seams. A single row or blue beads edges the sides while the front and back seams display eight bands of two rows of white beads alternating with two rows of blue pony beads. See Jarvis supplemental file in Arts of Americas office. 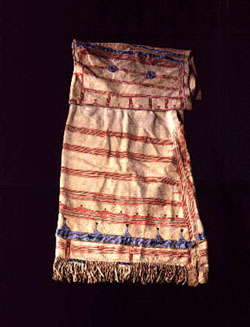 The side-fold style seems to have been worn by Dakota, Lakota, and Cree women, and possibly also by Cheyenne and Assiniboin women. Lewis and Clark are known to have encountered a party of Cree at Fort Mandan during November of 1804. This two-hide dress has been impressed and painted with red and dark brown pigment, a decorative convention among some Cree groups. However, it is also possible that this dress was made by a woman from the Upper Missouri area.

Indigo and blue-green beaded discs adorn the yoke and a beaded strip has been added to the skirt. The hem is tabbed and the skirt fringe was originally wrapped with dyed orange quills.

This elaborate two-piece, side-fold dress (see previous object, catalogue no. 53046) is decorated in part with dyed porcupine quills and cowrie shells, materials having a long history of use in native North America (although these cowrie, an Indo-Pacific species, must have been imported for trade). The brass buttons, red wool, glass beads, cone tinklers, and pigment were trade goods that came into vogue during the eighteenth and nineteenth centuries. The English gilt brass buttons on the yoke, like the metal trade tokens issued by fur trading companies, were popular decorative elements and status markers during the early nineteenth century. Lewis and Clark noted that brass buttons were more highly sought than all other items save beads. George Catlin painted several Lakota women, one the wife of a trader, displaying rows of such brass disks on their dresses. This is a special occasion dress, worn especially for dancing.

The yoke of this dress has been impressed into a geometric pattern and then painted with clear sizing or hoof glue, a decorative treatment of hide practiced by several central Plains groups including the Cheyenne and the Hidatsa. The rows of horizontal quill work punctuated by red wool "tufts," as well as the arrangement of the brass buttons, suggest that this dress may have been made by a Cheyenne, Dakota or Lakota woman.


This may be the dress given to the Peale Museum by the Hutter family in 1828 and described in the Peale ledger as a "Soux squaws dress." Clark also acquired a dress on the expedition that he described as "an Indian dress, such as the Soues women ware [sic] in their dances." He presented that dress to first lady Dolley Madison.
http://140.247.102.177/Lewis_and_Clark/dresslg.html