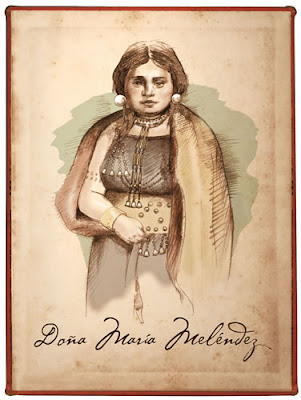 
This just in from Sheila:
http://www.flmnh.ufl.edu/histarch/ndd_mission_sites.htm

The people who lived at the village of Nombre de Dios were in closer contact with Europeans than any other Native American group in all of Florida. The Timucuans of St. Augustine were not only the first to confront and resist Spanish arrival, but they were also the first to confront and suffer from European diseases on a continuous scale. The first decade of coexistence (1565-1575) undoubtedly reduced the Timucua population of the St. Augustine region dramatically, and this reduction was probably a major factor in the ability (and decision) of the Spaniards to relocate St. Augustine in 1572 from Anastasia Island to its present site on the mainland.

The generation of Timucuans born during the 1560’s reached adulthood in the 1580’s, which was when missionary efforts in St. Augustine realized their first successes. Success was aided by the cooperation of the Timucuan caciques (chiefs), who appear to have quickly recognized the advantages of Spanish alliance.

Doña Maria Melendez, a member of the Timucuan noble class, is an example. She was the Chieftainess (cacica) of the Timucuan town of Nombre de Dios during the late sixteenth and early seventeenth centuries. Doña Maria was a Christian, and her mother (who had been the ruling Chief of Nombre de Dios before her) was one of the very early Timucua converts to Christianity. Doña Maria married a Spanish soldier named Clemente de Vernal, and he lived with her and their children at Nombre de Dios. By 1606 she had become the ruler of the Timucuan tribes extending along the coast between St. Augustine and approximately Cumberland Island, Georgia , possibly through Spanish intervention

Once the Spaniards managed to establish a viable settlement at Saint Augustine, they worked diligently to acculturate influential Indian chiefs hoping to use them to forward their colonial policies and goals.In the last decade of the sixteenth and first decade of the seventeenth centuries, their proselytizing efforts began to bear fruit.Convinced of the advantages of associating and aligning themselves with their new neighbors, several Indian chiefs accepted baptism and used their influence to foster the spread of Catholicism and Castilian culture among their own peoples.Generous gifts of trade goods were sometimes held out as inducements to secure the loyalty of these influential Indians.

The Indian cacica, Doña María Melendez, became an important "go-between" and cultural broker following the establishment of Saint Augustine by the Spanish.When the English corsair, Francis Drake, burned and ravaged the presidio in 1586, it was the loyalty and support of this chieftainess that preserved the lives of the settlers from starvation and hostile Indian attack. When Doña Maria was wedded to a Spanish soldier, Clemente Vernal, Spanish officials in the presidio gave their enthusiastic approval in the mistaken belief that native matrilineal inheritance patterns would assure that Spaniards would ultimately dominate the native caciques. The royal governors at Saint Augustine were especially pleased by Doña Maria's acceptance of Catholicism and her willingness to use her language skills and influence to propagate the faith among her subjects and neighbors

From her own point of view, Doña Maria also had much to gain from her relationship to her new neighbors and kin.While the Saturiwa were accustomed to fighting interminable blood feuds with their Utina neighbors, the total war waged by the Spanish intruders in the 1560s and 1570s had proven to be far more disruptive of their way of life.By marrying one of the foreigners, Doña Maria managed to turn deadly foes into powerful allies and supporters.In the wake of the onslaught of disturbing new diseases, submitting to baptism and embracing the "cult of the cross" probably seemed a small price to pay for securing the patronage and protection of the Spanish spiritual healers and guaranteeing continued occupation of ancestral lands.Even Catholic indoctrination in the mission village of Nombre de Dios did not require cultural suicide, but was a more syncretic blending of religious elements that might also have helped revitalize the demoralized natives. Archaeological evidence from mixed dwelling units in Saint Augustine (albeit from a later period) suggest that native spouses dominated the domestic sphere and thereby assured the continuance of many traditional traits that they passed on to their mestizo children

Even as Doña Maria supported the presidio in times of need and regularly entertained Indian delegations at her home in order to spread the Christian faith, she was as quick to promote her own political interests as a tribal leader as she was in forwarding the diplomatic interests of her patrons in the presidio.A letter written to the crown on February 20, 1598 requesting reimbursement for entertainment expenses incurred on such occasions suggests that this cacica muy ladina was fully capable of moving between the social worlds of her Indian subjects and Spanish relatives and sponsors. Moreover, while Doña Maria originally held sway over the mission village of Nombre de Dios on the outskirts of Saint Augustine, by 1604 she had used the power of her Spanish patrons to extend her chiefly authority over the Tacatacuru peoples of Cumberland island and the coastal Georgian mainland.
A brief history of the life of Chief Don Juan of San Pedro Island [modern Cumberland Island, Georgia] also illustrates the effectiveness of presents in securing the loyalty of Indian chiefs and in forwarding Spanish colonial interests.Don Juan's predecessors and people had suffered greatly during decades of war with the Spaniards settling La Florida. Raised under the tutelage of Fray Baltasar López, this acculturated young chief learned from an early age the advantages derived from a close alliance with the Spanish. He adopted many Castilian customs and used his political power and influence to order the people of his ca&ccedilçgo to embrace the Catholic faith.In order to reward his efforts in propagating the faith and to further incline him toward Spanish interests, the Consejo de Indias wrote to the king in 1596 in favor of the suggestion of the governor and some friars to take the unprecedented action of paying this Indian "the rations and salary of a soldier of that presidio." The Spanish policy paid off the following year.When Don Juan's neighbors to the north rose in rebellion, killed the missionaries living in their midst, and pressed their campaign southwards, Don Juan organized the defense of the province and led a successful counterattack that routed and forced the Guales to retreat. Once again, the fidelity of an influential Indian interpreter and cultural broker was decisive in the defense of Saint Augustine and outlying mission stations in the early colonial period.

From the picture we can see "Hopewell influence" in the necklace she is wearing has long copper tube beads common among Hopewell sites and an armband of yellow metal, could be post-contact, but was common for women of that day, (an before), to have hammered copper or silver arm bands. She is also wearing the universally popular disc earrings that are found in all tribes East of the Mississippi for at least 500 years of native copper or silver, or post contact metal of some sort.
It looks as if she wears a variation of the wide leather metal studded "girdle" belt spoken of by Spanish explorers, adorned with bells, chains and button metal studs of post contact origin??, (I have seen copper bells in Hopewell finds, but they are more like "harness bells"-round, than bell shaped bells shown here, the studs could be like the wooden buttons found covered in hammered silver in the mounds).
One can only guess at the beads, they are most likely pearls or shaped shell beads, (if she chose pre contact materials for her necklace).
She seems to be wearing a deer hide shawl
What can we say of her dress? Is it painted leather? Is it woven fiber? Hard to tell. How is it held up? Is it attached over the shoulder under the shawl? History would say that it was. But one can't be certain. The way it hangs across the breast, it seems to be slung from the shoulder under the shawl by the strap contained in the fold over channel, (like Mia's dress).
I see in her history she was a early convert to the church, but yet she retains the dress and tattooing of her ancestry.
An interesting image with back round to add to the collection, thanks Sheila!
Keep digging!