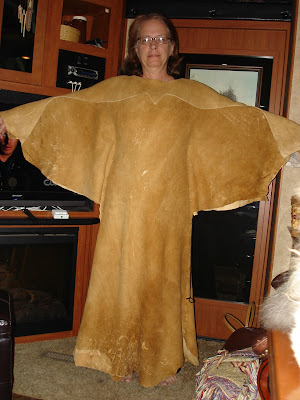 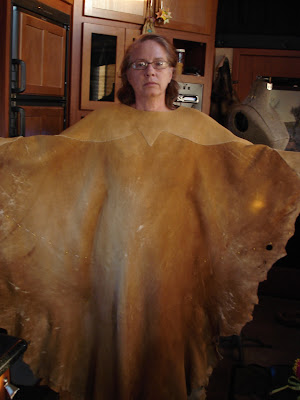 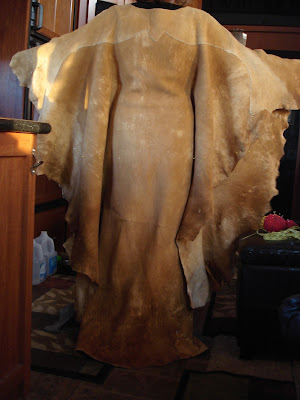 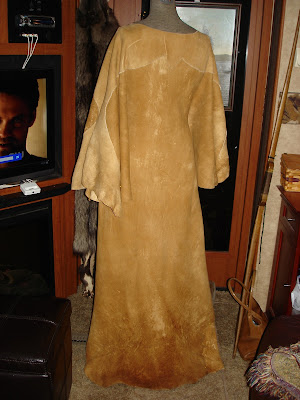 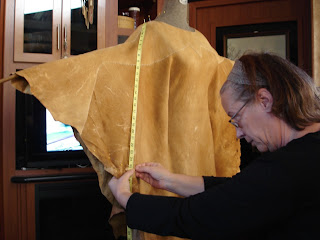 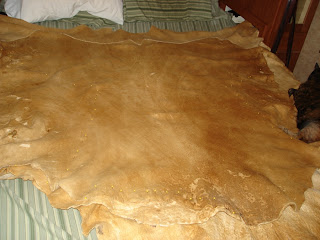 Big things are happening now! Sorry I haven't posted much, have been busy editing materials collected at the Chicago Field History Museum, which will not only turn out to be a documenting of the Cree Dress, but also I documented and took pictures of several Plains dresses from  head to toe that I am editing little by little and posting here.
We are also smack-dab in the middle of our annual migration South for the Winter, so my days are spent mostly in travel, my nights trying to get some sewing and editing done.
After what I learned about Plains dresses at the museum, I finally had the confidence to cut the sleeves on my own Two Hide dress as well as put some leather inserts at the bottom to even out the hem and trim the sides to traditional width. 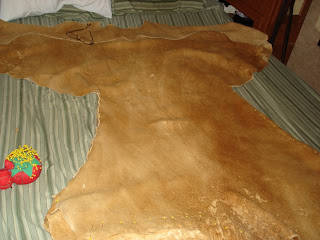 It took much measuring, pinning and trying on in various poses to get the magic number of inches on my sleeve, which was 25". This way I can cut fringe on the sleeve and still have long sleeves.
From that point, I, using the natural shape of the hem with the legs of the hide as a guide, pinned the sides at the bottom and then pinned up the sides in a gradual angle to meet the new waist.
All this was done on the form, as I could then see how my adjustments would hang when finally cut. 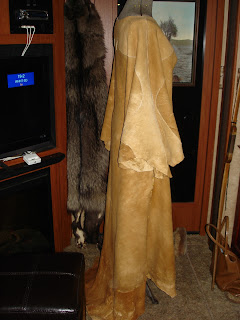 Imagine my delight when I pulled the dress off the form, laid it out and found my pinnings gave me a flawless angel wing shape shown so often in books on how to make a plains dress.
I would never have just thrown the dress on the bed and pinned it up without pinning it first on the form, double checking it on me, then laying it out to see if there was something off in my adjustments before cutting. There is just too much at stake here to to skip a step.
As you can see, everything came out just wonderful and I can now get on to putting the gussets in the side seams and cut the sleeves, all of which I can do with confidence now that I have seen what was done with the actual dresses on display in the museum.
I went through and re-soaked and re-split all my sinew thread so I could do finer work, I learned a thing or two about sewing when I examined the Cree dress, one of the things being that she used hair thin sinew to sew the garment up, and it's still holding strong today, (most cotton and silk thread is deteriorating on historic garments after 70 years or so). I also noted she used a much smaller and tighter stitch to sew things together, which I emulated and will have to go back and resew some seams on the yoke to reflect this.
I learned about a way to sew seams that I knew about as a child, but thought the stitch was just for moccasins, now I realize it's a stitch for just about every seam. It involves sewing a welt in every seam.
You place both right sides, (outsides) of fabric together, then slip a leather thong sandwiched in between and whip stitch very tight and close on the wrong side of the fabric. When you finish you pull the seam open so the welt sticks up and you either trim it close to the seam or fringe it depending on what you want.
Just about all the dresses I examined had the side seams this way. Instead of stitching up the side or using thong closure, They cut the side extra hide off, (that normally would be left on and cut into fringe), then used the method above to reattach it. They used the leather welt they cut off, say 4 inches wide, between the two side pieces then fringed after whip stitching the seam on the inside.
Hope this makes sense, will add pictures to better show this later, I just wanted to touch base with everyone today and let you know I finally cut leather and am getting on with things, will write more as I have time!

I also noted many dresses had patchwork pieces sewn into the hem, (which we know about), and even on the rest of the dress into the yoke, (which we did not)! I felt better about sewing leather patches to even up my hem after seeing this.

I also finally figured out how they cut the armpit and sleeve so everything hangs right, it was a thunder stroke moment where I realized I needed to cut a simple one inch dart, which I did with my eyes shut and it just all fell into place, a simple one inch cut completely changes how the garment fits and moves...more on that later.....