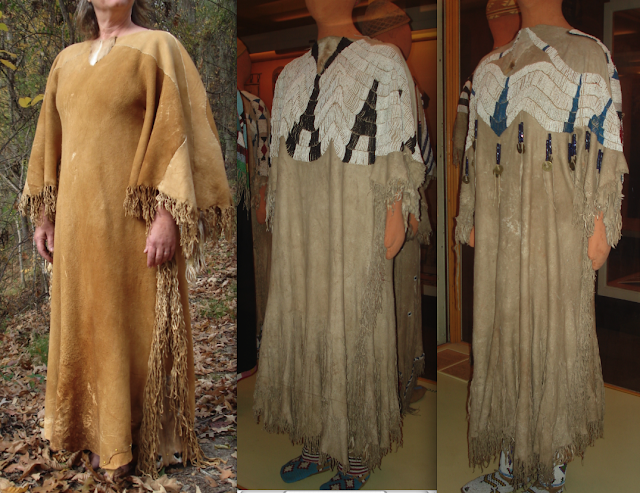 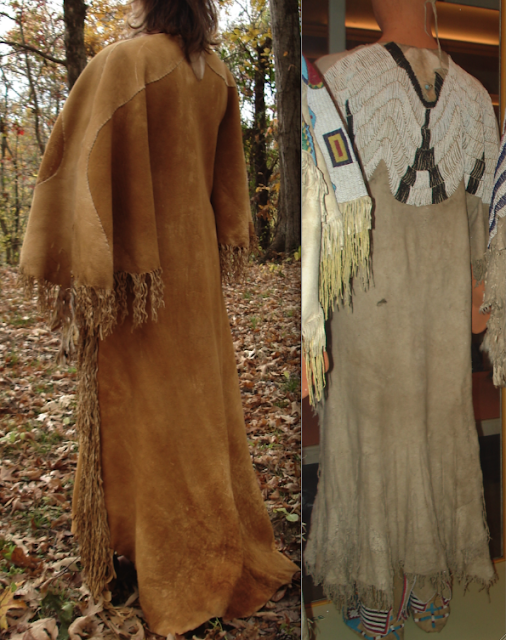 I changed my mind about fringe and such after seeing the two hide dresses at the Chicago Field History Museum.
Most of these dresses were post-contact and were made from mountain sheep hides. This you can tell by the tail in the front and back at the yoke.
This means the hides were thinner and much smaller.
My hunch has always been that Women began to use Mountain Sheep Hides because they were easily available post contact and had no value for trade with the Europeans.
Also, the great Elk herds had dwindled due to over-hunting and the introduction of European stock, which brought a form of Tuberculosis to the Elk and Buffalo. This caused Women to use what was more readily available to them, yet acceptable, for their clothing.
Since my hides were prepared sans tail and haired hide edge on the belly and legs, I had to improvise. I used deer hide for the tails and the leg and dew claws for the neck edge, sleeve ends and the gusset edge on the hem. This is cheating, I must concede, but after looking over more than a dozen dresses, under close scrutiny, I found that there was much improvising going on all the time.
I saw mountain sheep yokes on elk dress bodies, deer dew claws on the sleeve edges, entire beaded yokes cut off original dresses and re-sewn onto new hide bottoms. Every dress had some type of patching along the hem as well as other areas. Most had the fringe sewn on and then cut. Entire areas of sleeve were patched and or replaced.
In fact, the more dresses I examine, the less I buy into the notion that all dresses looked more or less the same. In basic shape, yes. In design I couldn't even find two that were similar. In most cases a silhouette was sought, but to get that shape, just about any kind of patching, gusseting and improvising was allowed. 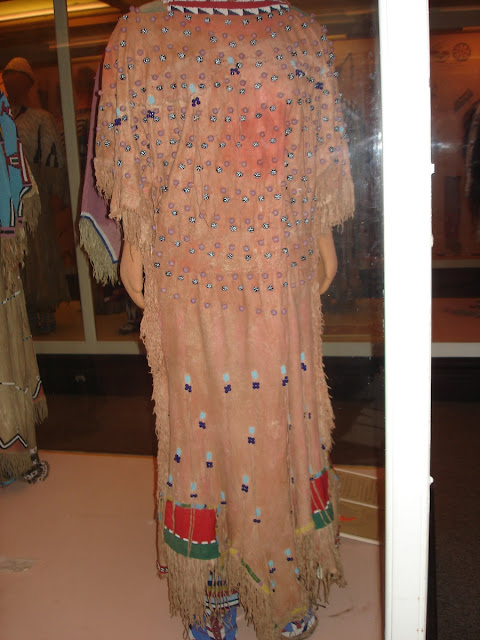 Certain ideas followed tribal custom, but for every rule I have found an exception. This was a true yesterday as it is today. Some women are followers, some are leaders. Otherwise fashion would have never evolved at all.
A case in point would be the Crow dress on the right. No one would say it followed any rules other than it was made of 3 hides. This Woman followed her own heart. There are tribal hints in the cut of the garment and the wool patches, and some of the bead work could only be Crow.
But from there it takes its own journey into a garment that was never seen before, and perhaps, since. This Lady marched to a different drummer and had the courage to wear what she had created.
It reminds me of a Powwow I attended at Nett Lake, Minnesota several years ago. The Jingle Dress Dancers came out in the dresses that have remained relatively unchanged in design since the 1940's, namely a sort of pocketed shirt dress, for lack of a better description. But one Girl stood out. She had fashioned a modern A Line dress that more or less followed the curve of her body, in a modest, yet fashionable way.
I can still remember the snorts of disgust I heard from all the Elders around me, the whispers and the general attitude of disapproval. Yet, that young Lady danced. I hope she is still dancing in that dress today, or has passed it along to her daughter. I haven't seen one like it since, but I have noticed the loosening of the "dress code" that has shaped Jingle dresses now for two generations. I'm sure she played a large part in that change.
This is what fashion is all about. As times changed, so did the ideas about what would be worn. There was always the first one who was brave enough to try and change things.
My struggle is that I can't make a Pre Contact garment no matter how hard I try. The only way for me to truly create one is to go back into the past and make it. Since time travel is impossible, I have to do the next best thing.
Create a garment that is similar in shape and design using the old methods, and even here I have to cheat, I used a sewing needle, scissors and a cutting wheel since I have no training in using an awl or stone cutting tools, my project would have been a travesty if I had tried to make the garment in ways that I had no training in. So this was my first compromise. 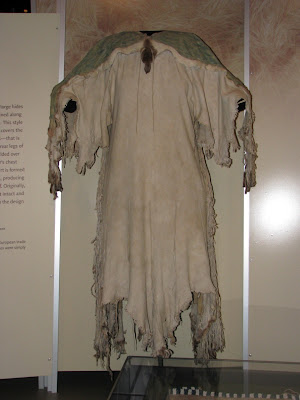 My second was in using Brain Tan Elk hides I had not created myself, nor could I get them made with the hair on the edges, legs and tail intact. Perhaps someone will make these hides for me someday, but for now I must work with the materials I have, or forgo the project altogether.
So I had to use deer tail on my Elk Hide, but I have seen post contact dresses improvised this way in museum, so I can assume when the proper tail or edge was not available, a proper substitute was found even Pre Contact.
My third compromise is yet to come, having no Pre Contact Two Hide dress available to study, other than the one Arikara dress, (on the right), which was simply painted, I have to make some assumptions as to how the yoke was decorated using pre contact materials. 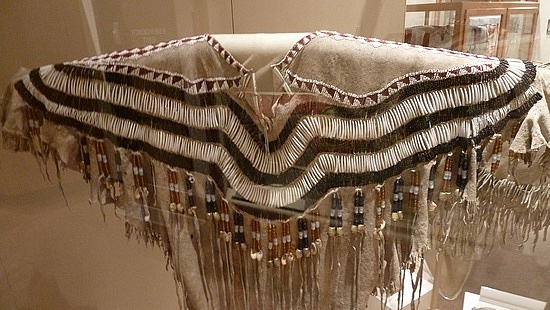 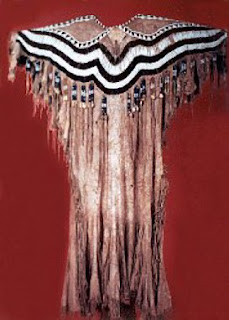 One Nez Perce Dress comes close. It features rows of Dentalium shell, which I have already acquired. It also has bead work. This is my dilemma.
I have no pre contact dresses that feature beads of any kind, but there are resource materials that list pre contact Women having stone beads of many types, Jasper, Obsidian, Jade, soap stone and pipe stone. There is no description of how they were arranged or even if they were attached to the dress or strung as necklaces.
I have to borrow courage from a new Artist friend I met lately, who had the daunting task of recreating a completely feathered Palanquin for an exhibit in a museum in Moundville, Alabama. He had sketches and descriptions, but no detail as to how feathers were arranged. He found resource material on the proper attachment method, but he still had to arrange the feathers in a probable pattern. For this he had to use his imagination or give up the project entirely. He spent many sleepless nights, but finally, in a dream, it came to him what he should do and he did it.
According to him, better he did something than he abandon the project and not allow a reasonable representation to be built for people to admire and learn from.
This is where I find myself, looking at thousands of pictures and examining hundreds of dresses and trying to figure out what was done before trade beads. I think the Nez Perce dress comes as close as anyone will to a pre contact pattern, but the question still remains as to what the bead work would be composed of.
I have stone, bone and wood beads to chose from, (but can find no real documentation as to massive numbers of them being sewn to dresses), as well as copper cones and tube beads, (common pre contact), quill work and pearls.
Since pearls are present pre contact in huge quantities, I am leaning in that direction. No other bead shaped item is as prevalent in all tribes as the common freshwater pearl. Thousands upon thousands have been found in graves. They are shown on garments as well as wrapped around arms and legs.
If copper made it all the way from Northern Michigan and Minnesota to Florida in great abundance, I'm sure trade went the other way and pearls were traded to the Northern Plains.The problem being that the Northern Plains Peoples did not build mounds to bury their dead, preferring platform disposition.
This leaves us with few clues as to their dress, other what has been handed down orally from the peoples themselves and the few post contact garments that follow the custom of the past but the materials changed with the introduction of trade beads.
The Woodland Mississippian Mounds as far as Wisconsin have abundant pearls in them, but few remain intact as they were worn because of inherent damp soil burials. The few that do remain do so because of their closeness to copper plates found in graves, which chemically helped to preserve them. This means that there were probably even more than we could imagine, as they are easily degraded to nothing when deposited in the soil for any length of time.
The Plains People were a wealthy People who traded far for their adornment. They had dentalium shells in great abundance, even though they originated off the Western coast of what is now Canada. The idea they beaded with pearls before trade beads is a logical conclusion. I can't imagine them going without such a beautiful item when their next door neighbors, (the Ojibway and Mandan, as well as many others), were literally dripping in them.

At the same time, I hesitate to create a dress with no solid foundation in evidence. It is obvious that pre contact Plains Women used dentalium shells to decorate their dresses. But what did they use for the bead work?