How To Make Twisted Fringe on Brain Tan Leather 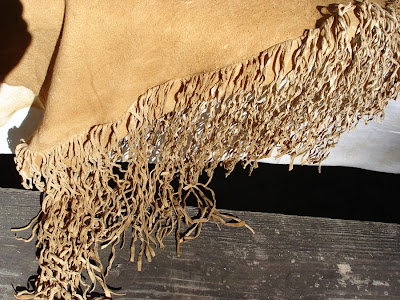 After spending considerable time studying museum dresses, I began to recognize a pattern to the fringing that was not just the result of time and wear.
I had also noted, upon cutting the fringe on my dress that the straight fringe strands were very weak and prone to tearing, becoming fuzzy and tangling. Perhaps this is not a problem with modern tanned hides, but with brain tan it is. 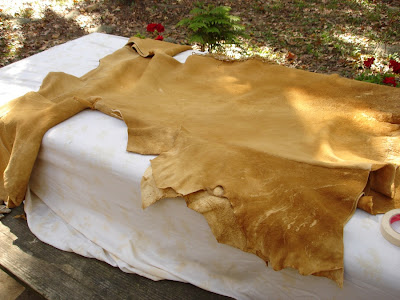 What had they done to improve the strength and appearance of the fringe?
The answer was simple and logical. Any backwoods girl who went to bed with wet braids would see it right away. They had dampened it and braided it!

This gave the desired result of not only adding a softer look to the fringe but gave the additional bonus of making the fringe stable and strong! 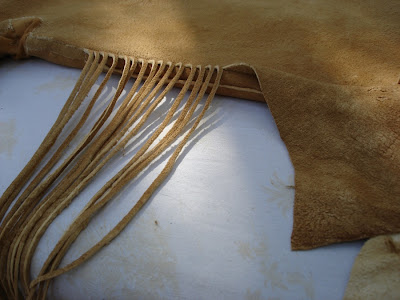 After twisting, braiding and allowing to dry thoroughly, the fringe is almost impossible to tear.

I started by cutting my fringe the thinnest I could while still retaining the integrity of the fiber. Thin fringe was in, as far as my research went. I practiced on scraps until I got a handle on it. Each part of the hide requires a slightly different width to retain integrity. Right handed Folks should cut left to right, lefties right to left. Hold the fringe to be cut in your left hand and slide the scissors up the strand pulling the fringe away as you cut.

I used my sewing shears and cut each fringe one at a time, some use a rotary cutter, I am not that proficient with this tool. If you are good with shears you can start the cut and slide the scissors up the fringe without having to chomp away at it, but it takes really good, sharp scissors. 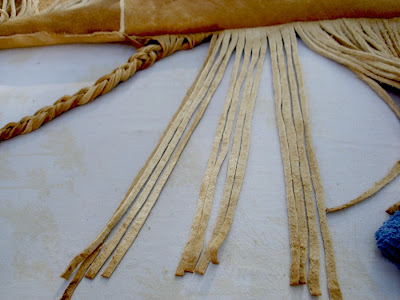 Clean you scissor blades and oil often, make sure no oil remains on the blades to stain the leather, (impossible to ever remove, better stiff scissors than a permanent oil stain!)

Keep in mind that when you cut your fringe, it is going to increase in length at least on quarter of the length, after wetting it, it will be at least on third longer and thinner. 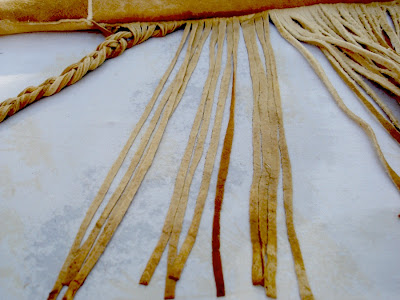 Here is the fringe all cut and laid out ready to start braiding.


I then separated the fringe into manageable strips of three, it takes some experience to know how many strands to use, if you use too few it will not kink, if you use to many it will never dry! Practice on scraps. 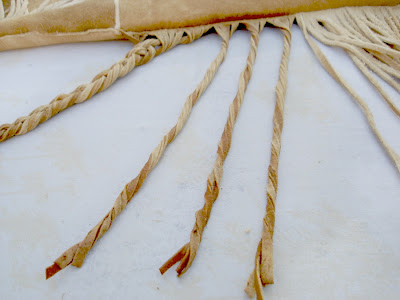 I then wet down the strips with plain water til saturated and then pulled each strip starting at the top and evenly smoothing to the bottom without tugging. Dampen all the way to the top of the fringe(welt) as this is the weakest point where the fringe meets the main body of leather. 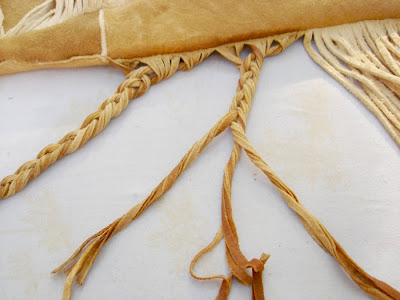 
I then gently twisted each group being careful not to over twist at the top or at the ends. Do not over tighten, it will never dry and will overstretch the fringe! 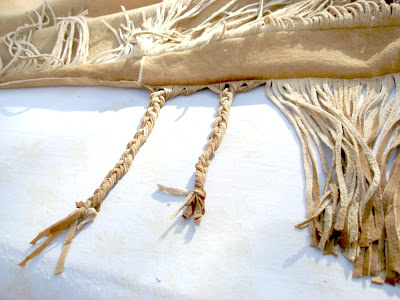 At this point I began to loosely braid from top to bottom, making sure to keep the twist even as I went and using the traditional overhand braid.

Do not braid tightly! Make it loose like a braided bread roll. You can tell if it is loose enough when you are done if the braid itself does not kink up but lays flat and pliant. 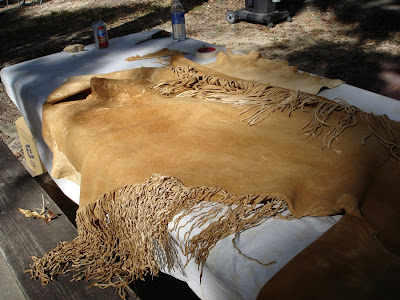 When I reached the end of the braid, I tied the strands with a scrap of leather, tie loosely, as not to impede drying nor mark the leather. Cut these strips before you start to braid about two to three inches long and wet before tying, you will need a hundred or so depending on how much fringe you do in a day. use a simple knot, you don't need to get carried away or you will never get them untied! 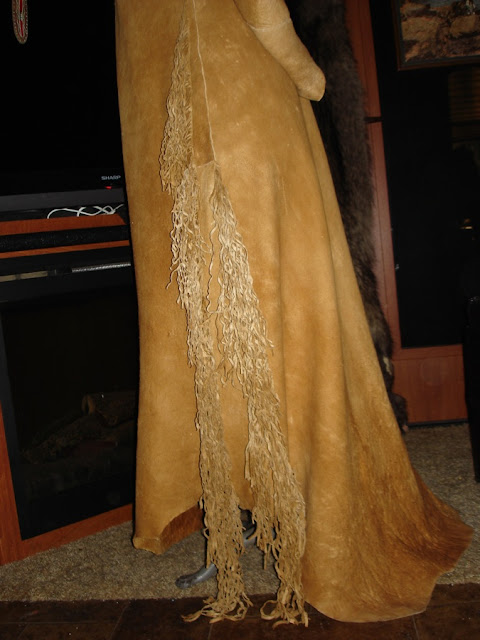 I then took the dress inside and put on the dress form and let dry for 24 hours, making sure that none of the braids were still damp by loosening a braid and checking the inside of the twist to be absolutely sure it was dry.


After drying, I carefully loosened each braid and let hang without pulling on it or combing it with my fingers to make sure the kink had taken and the twist was thoroughly dry.

Here I am cutting and braiding the other side of the dress, one side is more than enough work for one day!

And here we have the final result, a strong twisted fringe that will last several lifetimes!


It will eventually relax and lose most of its kink, but the strength and beauty will remain!

You can always re-braid and re-kink at a later date, just be very carefully to twist each strand exactly as it was done before, changing the twist will create an ugly look! Also, use less water the second time as the fringe is already seasoned.


Some fringe on the dresses I observed was not twisted, but all of it was water treated and stretched to improve its strength, an article I later found said they used saliva on the fringe, but I just didn't have a watery enough mouth for this attempt, and it would be considered a bit unsanitary in these days!


Modern Leather fringe is twisted using a solution identical to what is in windex, basically ammonia, just like a modern hair permanent! You are welcome to try this, but it would not be exactly traditional and windex leaves a bluish cast.


Hopefully you will find this helpful, it took me a long time to figure out what was going on with the fringe thing at the museum, but thankfully, I finally figured it out! let me know how your project goes, I would be glad to help out with any problems you have and would love to see your work or any feedback you might have!