I cut two triangular gussets from a separate piece of leather as well as four rectangular strips of leather 4" wide to serve as my fringe welts.

The most important part of placing the gusset is to get the bottom where you want it then ease it in up the dress until it sits flush and unwrinkled.

Then you turn the dress inside out and place right sides of the gusset and body together with pins on both sides of the dress, checking to see that the dress has not become distorted before placing the welts between the seams and re pinning.

Then you carefully unpin one pin at a time and wedge the "Welts to be fringed" between the gusset and side seam facing each welt right side to right side with the dress body proper. So your layers are, Gusset edge, welt edge, dress side edge, in that order.

I am using the instructions for this tutorial from a previous article I made for making my Two Hide Elk Dress, instead of creating a confusing link, I simply re posted the information used to make the previous garment. (If you get a bit confused, click on this link here and review the original article).


The Two Hide Dress was also a Siouan Garment and I feel the assembly would have been the same, as they were remarkable and cleaver seamstresses who would have plied their exceptional talents in the East, as well as the Great Plains.

You want to make sure your welts are symmetrical from side to side, (although you can adjust this late by trimming).

Now step back and check to make sure your dress is square and true, that one side flares and drapes as nicely as the other before sewing. Measure from the floor to the bottom of your gusset, nothing is worse than having your gussets knock the entire shape of the dress off.


Here are the seams properly faced and pinned with the dress inside out and the welts extending into the right side of the dress on the inside, (you can't see them, but they are there).

The next picture shows me sewing a whip stitch with real sinew close to the raw edge just far enough in to get a firm bite of each layer...


Here is the left side of the gusset sewn, then pulled flat. It's barley visible on the left, the raw seam still pinned and ready to sew on the right. This way of doing seams makes a flush seam allowance on the inside of the dress and a flat rounded look to the seam on the outside of the dress, the welt either being trimmed close to being invisible, or fringed. this is a strong, stable seam that will last several lifetimes without shifting of coming loose and was used on every garment I personally examined. there may be exceptions to this, but I haven't seen it yet.

The side seams are sewn by starting at the top of the dress at the armpit area on both the left and right after cutting the left sleeve away from the body of the dress. The left side armpit is cut by extending the sleeve out and cutting flush up the pinned side seam to the area of the armpit, stopping at six inches below the pit or just at where the top of the girdle, (belt), will ride. Sew down the side using the whip stitch shown, leaving the fold over seam area at the  right armpit open for now, as well as the bottom of the sleeve on the left to be finished after the rest of the garment is assembled. 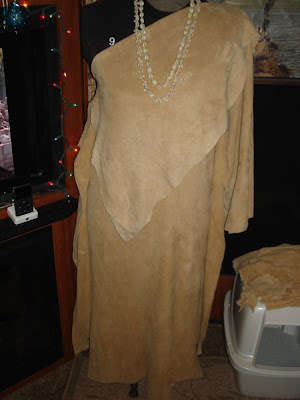 Here is the dress turned right side out and rehung on the form. You can see the fringe welts on either side that will be cut later.

I have also whip stitched a additional swath of leather to the sleeve to make it Siouan full length and to fill in where the leather was lacking on the sleeve end.

The Shoulder seam is sewn using the welt seam method starting at the neckline and sewing down the top of the arm seam.


I then added my welts between the layers..and whip stitched all together, then turned, flattened the seam and trimmed the welt to be flush.

The leather across the top is very thick and spongy, very hard to sew easily. This also creates a stiff yoke that adds structure to the dress line itself, but is a total pain to sew and forces you to sew a thicker seam to penetrate to the stable leather. 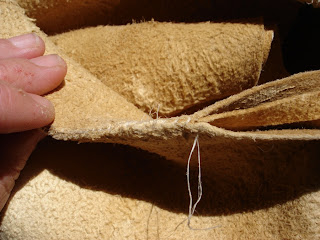 This will be important once beads and or shell is added, the shoulders must support a great deal of weight without shifting or pulling, but makes the shoulder seam heavy and bulky. Trimming the welt close helps to ease this bulk as well as using an equally thick and spongy welt.

I always match my welt thickness to the leather on the seams, this creates a uniformity of tension and weight that is noticeable. You must always be certain to have your seams very straight, or pucker and sway will translate into a ghastly bulge or swoop when done.

I feel this garment is a good compromise between the Eastern one shoulder dress and what we have documented about the Sioux way of assembling garments. The dress will be longer than Eastern styles and feature a full sleeve on the left reflecting a Matron Elders way of dressing and obviously Fall or Winter Wear. It is being assembled using the Plains Sioux way of finishing seams.

One must also keep in mind with this garment that it is being constructed under the direction of the person who will be wearing it, so it has elements that are slightly different than what I would consider the average, or optimal representation of garments this period.

I have created, in the meantime, a garment that more closely resembles the shape and form of average daily wear of this period and will post this dress and info in my next post. I am also making Sheila a lighter, shorter version of this same dress that I will be showcasing later on.

I would also like to say at this point that the use of the terms "Siouan" and "Sioux" are terms used by researchers from the time of first studies in the early 1800's. I am well aware that these are not the genuine names of the people represented, but names in common use by researchers at the time. Proper names for tribes and peoples are out there, but I retain the use of these archaic terms to make researching for others easier. I in no way intend to offend any peoples by my use of these terms.