Rethinking The Sauratown Dress, a Moment of Clarity

I love being wrong. Especially when I find out the truth and have a chance to straighten out the record and share that new found knowledge with others.

Something about the dress I was creating really began to bother me. It wasn't like the Sioux to change their clothing to that of others in their region. They were a clannish, tightly woven group separated from all of the tribes around them by language and belief.

It just wasn't like the Siouan Peoples to move into an area and adopt the clothing of the peoples around them, anymore than they would adopt their language and customs. It was well proven that they loved to trade with others, but they adhered to a strict set of beliefs that included their manner of dress.

The dress of the Tribes around them was a loose fitting large hide averaging two yards long by one yard deep that was wrapped around the body and tied at the shoulder, leaving the sides open, (except when tied at the waist), and often dropped off the shoulder to be worn as an apron revealing one, or both breasts and often the backside as well. This suited their lifestyle well and was probably their garment of choice for hundreds, if not thousands of years.

When it came to the Sioux and their style of dress they already had a garment in their past Canadian history that would suit just fine. While living in the Canadian wilderness they wore a one hide side fold dress that joined at the shoulders. At that time they had separate detachable sleeves and leggings, also a hooded coat. They employed a type of sewing used to hold these dresses together, careful, small, welted, whip stitched seams were the hallmark of the of Canadian Northeastern tribes because they needed to keep the cold wind out and provide a solid, stable outfit. In no other area of the Western Hemisphere do we find this type of sewing, especially in the South where clothing was casual and loosely knotted at the shoulder or cinched at the waist.

Their Women were also the very model of modest people from the North, who would perhaps be less likely to go bare breasted at any time, (as the one shoulder dress reqired), since it was not in their hereditary past, as would a Southern Tribal member to whom going naked was a hereditary way of life.

In terms of Native American History, Clark Wissler, Author of the "Anthropological Papers of the American Museum of Natural History, Vol. XVll, Part ll 1915" made an extensive study of the evolution of the everyday wear of Pre Contact Aboriginal peoples of this continent. If you want to read this very important work you can download the PDF Here.

According to his studies, the Two Hide Sioux Plains dress came about once tribes moved from East, (where they practiced and agrarian lifestyle), to West and began hunting buffalo and living a Hunter/Gatherer style of life. Freed from agricultural chores and such duties as pot making and permanent home building to follow the abundant and easy to harvest, massive herds Buffalo that had recently overpopulated the Plains provided them with a relatively affluent lifestyle in which they had more time to make and prepare more decorative and flowing clothing, ergo the Great Plains Two Hide Dress.
I had always assumed, (as have many before me), that this migration was from the Hudson Bay area to the Northern Plains when evidence is now mounting that the Siouan Peoples first moved into the Eastern States presently called North and South Carolina during the Woodlands period and THEN migrated onto the Great Plains.

When they moved to the Sultry weathered South they simply removed the accessories they didn't need and had the perfect warm weather dress. Here are two exquisite examples. I want to point out that the text in describing the construction in the first dress agrees with my theory. Please feel free to click on the pictures to magnify them so you can read them easier. They are both post contact, but they reflect a dress that has been in existence for more than 500 years. 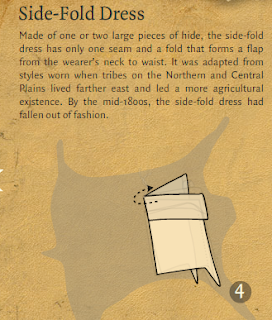 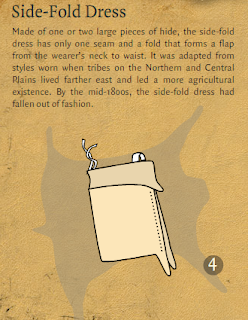 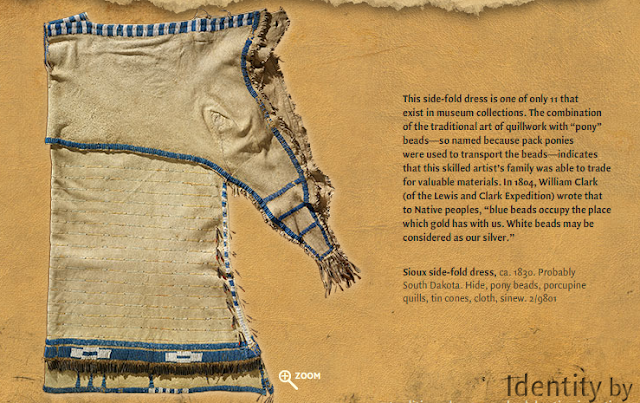 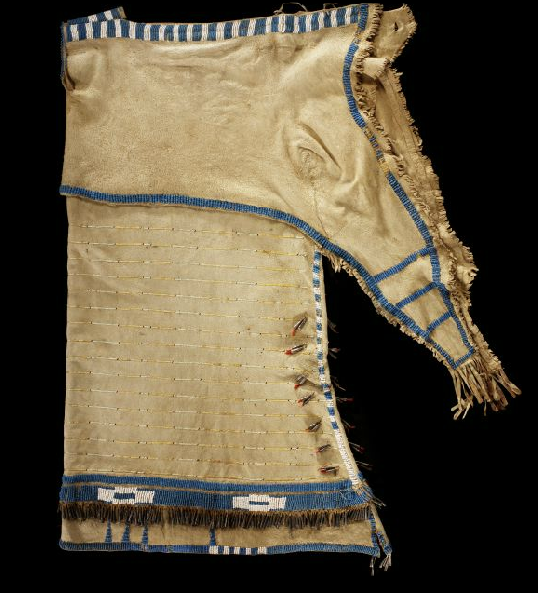 How could I prove that this design was the Sauratown Woman's Dress? One dress I had seen in museum collections kept popping into my mind. I searched my archives and came up with the dress below. 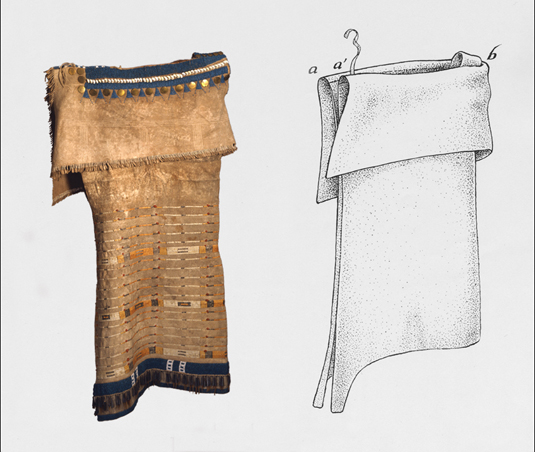 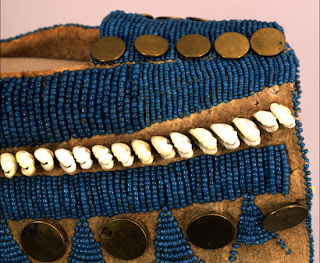 This dress was collected from the Sioux in the early 1800's. If one looks very closely at the bead work on the front one can see something in this Yanktown garment that leads us directly to the Sauratown peoples.

They are miss identified as being Cowrie, which is easy enough to do if you aren't a shell collector, but closer examination shows them to be a shell in common use and normally found in burials in the Carolina's during the Dan River, Woodland and the Early and Late Saratown eras and not a shell used by Plains Women on their Two Hide dresses.

What were these shells from the Florida Estuaries doing on a dress in Yankton, South Dakota in the early 1800's?

Trade? Unlikely. The Plains Sioux used many types of shell in their garments pre contact, mostly dentalium. In all the dresses I have examined, I have never seen this particular shell used on a single Plains Sioux garment, especially not the Two Hide Plains Dress.
The Plains Sioux did make use of the European imported money cowrie Post Contact in place of Elk teeth sometimes, but cowrie used Post Contact are an entirely different family than the marginella which was used for thousands of years before contact. I have never seen marginella used on a Sioux garment until this one.

Then there were the glass pound beads. Most Plains Sioux used the powder, or sky blue type illustrated in the first side fold dress shown above in the first pictures. Yet the side fold dresses shown here have a deeper periwinkle blue more popular with the South Eastern Tribes and included in their mound burials.

Also, the beaded patterns themselves slightly differ from those of the Plains Sioux but have enough of a similarity to firmly place them within tribal bounds.

Is this dress the missing link to what Sauratown Women wore? It could be. You must remember that generally a closed society that refuses to change its language or customs even when the relocated would also retain the rule of only marrying people within their own tribal lines.

This meant that Sauratown brides were exchanged with the Plains Sioux to diversify the blood line without leaving the tribal bounds. Many tribes practiced this and they were very careful to prevent inbreeding by finding other related tribes and traveling to marry off their young people to each other to prevent this through the "Totem" system.

This dress could actually be a Sauratown exchange bride dress. How else would it turn up on the Plains? Local Women weren't interested in wearing a garment such as this, they had already moved onto the Two Hide Plains Dress, while their Southern Siouan Cousins were more strict in their adherence to tribal custom, (not to mention language), and retained the use of a garment that had served them well for over 500 years.

Again, I feel the Sioux Peoples migrated originally from the Eastern shores of Canada, then to the Sauratown area, then to disperse onto the plains. I stand by this assertion because the original style and manner of creating their clothes reflects those found in the colder Northern regions of the country and show a close assembly affinity to Tribal clothing designs found east of Hudson's Bay, such as the Cree, Ojibway and MicMac. I am not alone in this assertion, as the text in the first photo illustrates.

That the Saura Peoples spoke an ancient form of the Siouan language older than the language used by the then current Plains Sioux, (at time of European Contact), leaves us tending to think they moved to the Sara area and then dispersed to the Plains.

Recent DNA studies seem to bear a Canadian Ice Age origin out, as well as the oral history of the Siouan Peoples, who even while living in the Woodlands Sauratown Phase speak of coming originally from the East, but obviously not from the Carolinas area since they were in residence there at the time of their telling their origination story. Where else could this be and how much further East can you get on this continent than North Eastern Canada?

The Sioux also tell a story of how Elders warned the young people of the tribe against leaving their cornfields to follow the buffalo. We know they did not grow corn in Canada, but lived a hunter/gatherer lifestyle. So this places them in Sauratown and introduced to corn growing before they left for the plains.

I am not the first to suggest that the Sioux originated in Eastern Canada at the time of the great ice age 10,000 years ago and then disseminated to other areas of the country over the next ten thousand years. They were a hardy and adaptable people, nomadic in some cases, agrarian in others, but their original style of assembling clothing speaks to a much colder climate where good tight, welted seams were necessary, as opposed to the South Eastern Tribes to whom clothing was entirely optional and casually constructed at most times.

I think enough evidence exists at the very least to place the Siouan Peoples of Sauratown in the side fold dress. It was an original Sioux Dress, (as these examples clearly point out), and more suitable to the climate than the two hide plains dress.


An excerpt from "The American Anthropologist" Volume 7, Issue 3 reads:

And I quote this: These garments were fastened at the shoulders with leather. they were thrown over one or both shoulders and brought usually under one arm.
This article talks about all the tribes of the Carolina's area and not just the Sauratown people. I feel that since all the tribes around them wore a one shoulder garment that is documented, it leaves the Siouan people wearing the dress attached at Both Shoulders.

Time will bear out my conclusions to be either faulty or truth, but somehow I feel closer to reality placing the Sauratown Woman in this garment than any other.

Now to Create it Sauratown Pre Contact. Coming soon to a Blog near you!