While making Sheila's dress, I was also working on a sportier version of what I thought the well dressed East Coast Native Woman was wearing. It features a shorter hemline and little or no sleeve on the left arm.

I also constructed it from modern leather as there were so many problems I had to work out, I wasn't going to use good Brain Tan on what was mostly an experiment and could have very well have failed in the execution.

I started this dress before attempting Sheila's and I am very surprised how nice it came out. I got a bit carried away with the fringe but it was there, so I cut it, thinking I could always trim it down later if I like. (The blue strap T shirt on the form has nothing to do with the dress, I use it to hold the cover in place and give me a more pinnable surface). I also left the skirt a little longer and the fringe a bit shorter, I like a little more coverage on the leg.

This garment, I feel, at least in construction, if not style, better reflects the day to day wear of the Native Peoples of the East Coast. Of Course, they may have worn it with one breast exposed, but today's conventions require a bit more modesty if one is to go out in public.


This dresses basic construction comes from a dress lent to me by my friend Mia, who had a dress gifted to her by Tribal Peoples, I did some repairs to it for her and she let me take notes on it's construction for later reproduction.

The dress was assembled using artificial sinew and a simple welted seam up each side using a Tandy sewing awl, as this was how Mia's Dress was constructed.

I left the shoulder fold over on and stitched it up to create a short sleeve, this is what was on Mia's dress originally, but had been cut off before it ever came to her. Hers had also been changed by adding a button closure at the top of the fold over sleeve at one point.

This is one of those projects that only took a coupe days and was made because I had the hide laying around and could see that it needed to be this dress. I didn't have enough leather to make a sleeve or cape for the other arm, but have a lovely white fox stole that should compliment the leather quite nicely. I imagine I will sew on seed beads or pearls when I get the chance... 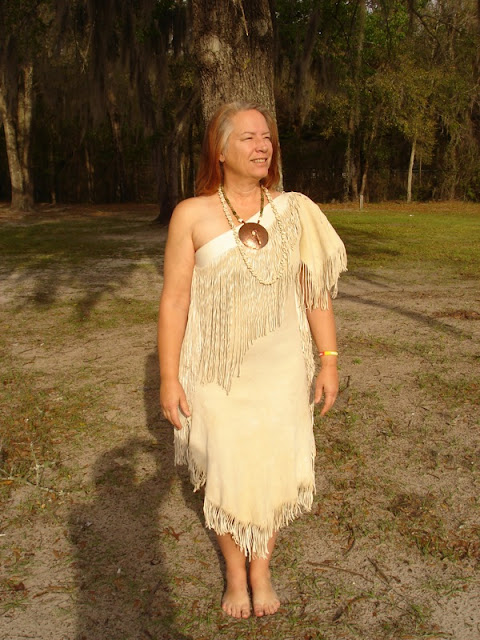 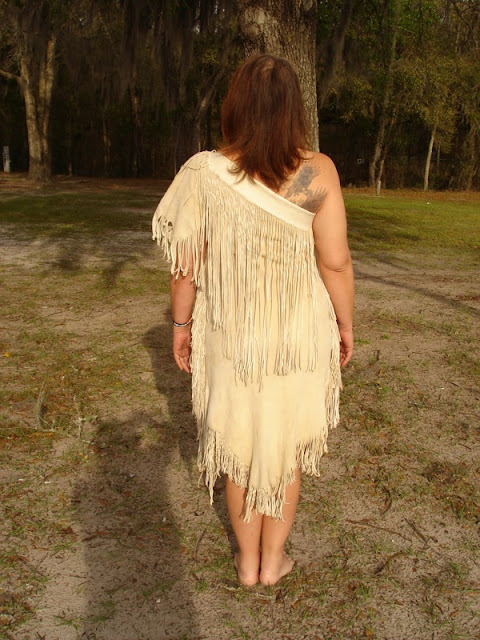